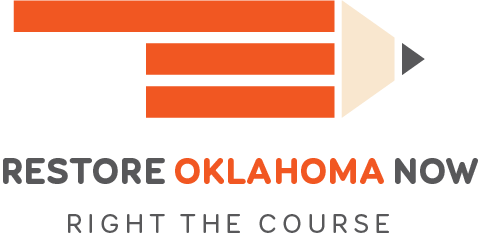 OEPA is in concert with RON in withdrawing this petition. OEPA has been the driving force behind this effort; with a lot of support from many others. We know many will be disappointed with this action. However, we believe it is much preferable for our Democratic form of representative government to work than to have to resort to the initiative petition process. The legislative process has worked. Teachers are getting an average of a $6,100 pay raise, which is $2,100 more than the petition drive would have gotten them at $4,000.

Having said that we, in concert with RON, are committed to supporting the 75% of the legislators that had the courage to vote for this emergency tax increase as those that are threatening to defeat them engage. We are also committed to opposing any effort to overturn this landmark legislation.

Read the press release below.

OKLAHOMA CITY – The initiative petition seeking to pump $300+ million into public education by restoring the state’s gross production tax on new wells to seven percent has been withdrawn by organizers of the effort. The founder of Restore Oklahoma Now, Inc., said the group will focus instead on the 2018 legislative elections and participate in a broad coalition to defeat a possible veto referendum to repeal the teacher pay funding package passed last month.

“Restore Oklahoma Now was formed last summer with a single focus — to get our public school teachers a significant pay raise. We had lost faith in the Oklahoma Legislature. We thought taking the issue to voters was the only solution for our teachers,” executive director Mickey Thompson said. “We believe the presence of our initiative petition was a significant factor in the ultimate legislative compromise.

“We view HB 1010xx as a reasonable start. However, any effort in this or a future legislature to reintroduce a reduced GPT will be met with a new initiative petition, or perhaps a veto referendum, to protect funds for public education and other state services priorities,” he said.

The petition leader also said confusion and potential legal conflicts between the detailed allocation of funds in the proposed constitutional amendment and the appropriation of various tax changes contained in the legislative measures enacted last month was another concern.

Thompson added the language in State Question 795 would not have permitted schools to use those additional revenues for operational needs. “Our petition set strict parameters for how the new revenues would be allocated, 80% of it for teacher pay. We were asking voters to pass a teacher pay raise, not additional funds for classrooms,” he said. “And we couldn’t amend an initiative petition at this stage.”

He said the various organizations and individuals who pledged funds for SQ 795 believe their resources should be directed to opposing a possible veto referendum on the education funding package. “We will be at the forefront of any effort to defeat a move to renege on the school/teacher funding package,” he added.

“The Oklahoma Energy Producers Alliance has been a driving force behind the initiative petition to restore the GPT to 7% for all oil and gas production to pay our teachers. While we still think the 7% rate for all production is fair and competitive with other states, we understand that government works best through the legislative process.

“A functioning legislature requires compromise. The compromise established in HB 1010xx is a victory in the quest for moving Oklahoma’s teacher pay toward regional competitiveness, toward helping our beginning teachers make a living wage.

“In that spirit, the OEPA challenges the state’s other oil and gas organizations to join us in strong opposition to any effort, including the rumored veto referendum, to undermine the work of our legislature to begin to address our public education and teacher pay crisis.

“Yes, there is much more to be done, not only in restoring funds to public education, but in many other areas of state government, such as corrections, health services, child services, higher education and transportation.

“OEPA members come from virtually every community in Oklahoma. We are committed to working with the legislature and all stakeholders to find answers to these issues.  We believe our industry must lead. As Oklahoma-based energy producers, we will continue to stand up for our state.”