Trans Pacific Oil Corporation is an independent operator based out of Wichita, KS. In the past 5 years, we have expanded our operations into Oklahoma, and have recently been drug into the fight to protect our vertical wells from invasive and potentially harmful horizontal frac damages and drainage.

BCE-Mach filed the applications in hopes that it would be permitted to drill a horizontal well in the same common source of supply that Trans Pacific’s vertical wells are producing from, essentially steering their wellbore straight through the middle of our lease. This plot map provided by BCE-Mach depicts the well bore in relation to TPOC’s vertical wells in the SE/4 Sec. 34. In response, TPOC protested the three applications and a waiver of consent application that was filed when BCE-Mach was unable to obtain the consent of 50% or more of the working interest owners in our lease to drill the well.

Despite being a small operator with 21 employees, TPOC dedicated the time and effort to port forth the best case possible using an in-house geologist, engineer and landman. Despite facing a much larger company with the type of name recognition that Tom Ward brings at the OCC, TPOC’s protest succeeded and the applications were denied. Here is a copy of the report of the ALJ.

OKLAHOMA CITY – An ongoing saltwater purge in Blaine and Kingfisher counties and the relationship between horizontal and vertical drillers will be among the issues the Oklahoma Energy Producers Alliance will take up during the upcoming legislative session.

In a presentation to state legislators Thursday at the state Capitol, OEPA leaders discussed concerns they hope will be addressed. Kurt Bollenbach, managing director of Teocalli Exploration, a small independent oil and gas operator primarily located in northwest Oklahoma, discussed the ongoing saltwater purge occurring on the border of Kingfisher and Blaine counties.

Reported to the Oklahoma Corporation Commission July, the purge lead regulators to issue orders for the temporary restriction of disposal wells in the area. Bollenbach said the purge has been caused by producers disposing of the toxic water at too shallow of depths. Water with a salinity just shy of the Dead Sea’s is purging from cracks in the ground at a rate of 2 to 15 gallons per minute, enough to fill a swimming pool every day.

“The seasoned producers I’ve had discussions with as well as those professionals who are truly concerned with resolving this problem, we’ve had a general consensus of two things. One, this is not naturally occurring, we’ve caused it. Two, the purge is a symptom of simply forcing too much water at too high a pressure in too shallow of zones. In other words, we’re just overdoing it,” Bollenbach said.

Art and Yvonne Platt lost everything due to horizontal fracking.

It is gut-wrenching when we watch longtime Oklahoma small business oil and gas producers lose everything to the disregard of Horizontal frackers who take the oil and gas they have found and are producing leaving their destroyed vertical wells in their wake. This story really says it all. It’s never right to take someone else’s property.
https://okenergyproducers.org/wp-content/uploads/2016/07/Logo-sm-296x300.jpg 0 0 Naomi Lemon https://okenergyproducers.org/wp-content/uploads/2016/07/Logo-sm-296x300.jpg Naomi Lemon2019-07-03 21:32:452019-07-03 21:32:45Art and Yavonne Platt - Horizontal Fracking Victim

The Williams well in Kingfisher County was fracked into in January 2019. Frack fluid came up our wellbore and overflowed the tanks. 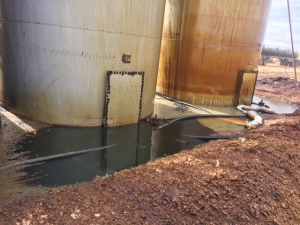 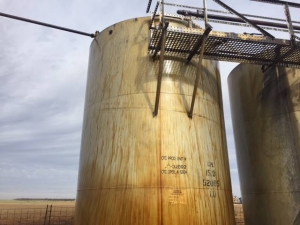 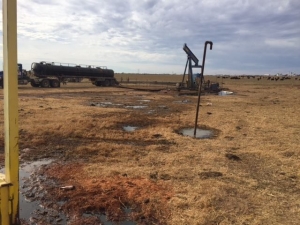 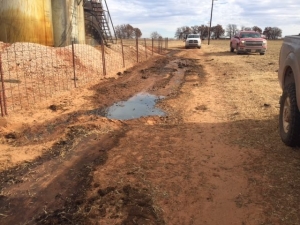 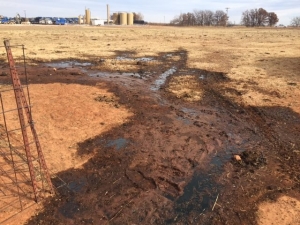 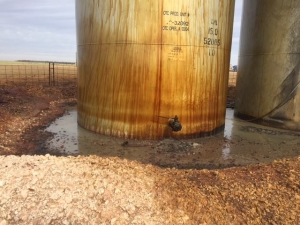 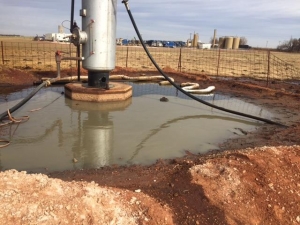 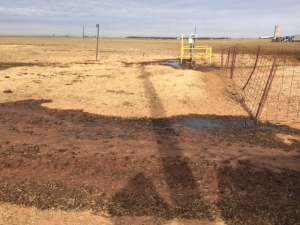 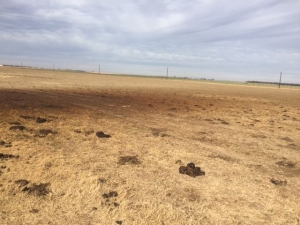 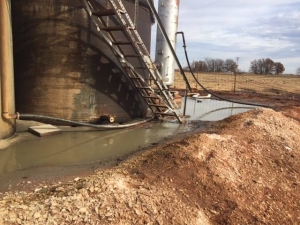 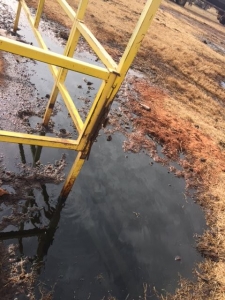 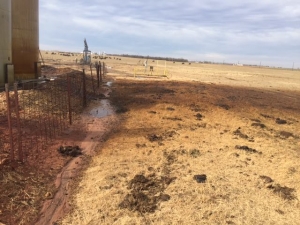 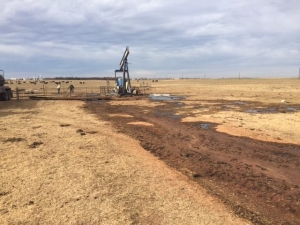 Rhinos Peck in STACK country operates 4 wells, sections 27 and 28-16N-10W in Blaine County.  Two have been blown up by a single DVN horizontal well (Kraken) in section 28.  Below is a picture and video of the frac sand blown out of our water tank (Peck 1-28 location).

Rhinos Peck 1-28 blew out during a nearby Devon frack. This well was hit with over 3000 psi of pressure. (Wellhead connections are usually 125psi test.) This is the second time Devon had fracked into this well – from another frack job.

This happened despite Rhinos Protest of The permitting of the well at the Oklahoma Corporation Commission. They were told no matter what they said the well would be permitted. The day before the frack they served Devon legal notice to not commence the fracking operation and that to do so would instigate another trespass. 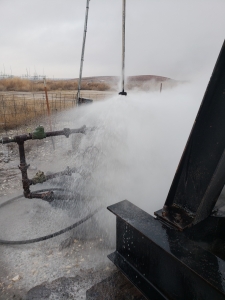 This is what it looks like when a vertical well is fracked into from a horizontal frac job.

The well in this video is the Singer Oil Koetter 1-35. It’s located in 35- 17N-10W of Blaine County Oklahoma. Casing and tubing were shut in, and the pressure blew stuffing box rubbers out. Pride Energy was fracking their Red Land 1H & 2H wells from more than 600 feet away. The Corporation Commission was called to inspect the cleanup. They also filed a well impact form. This is fracing water coming out.

The well in this video was 660 feet away from the horizontal frac. The Corporation Commission has a rule that they have to stay 600 feet away, but they routinely wave that rule. Some horizontal frac jobs are within 50 feet of vertical wells.

When the long lateral bill was passed, Representative Weldon Watson said on the house floor that the damage in this video doesn’t happen. The big oil companies at that time said this doesn’t happen. It happens almost every day! In fact, we have access to data that shows 1,000 wells have been hit in Kingfisher Co. alone, and this well was in Blaine County.

Oklahoma started off as outlaw territory. Our state has had an unfortunate history of lawlessness, bribery, and “wild-west behavior“. Unfortunately, this is where we are in the regulatory arena. It is not the Corporation Commission‘s fault; at least not entirely. They don’t have enough resources to count all the wells, much less regulate them.
Big oil companies continue to have much more influence in Oklahoma than any other state. In other words, they get what they want. That is not good for the industry in the long run. The public eventually discovers the game and often times puts a drastic end to it. We need professional and honest regulation. That’s why we at the Oklahoma Energy Producers Alliance have filed a bill to allow the Corporation Commission to self-fund by assessing a small fee on oil and gas. This will allow them to hire the staff they need and free up 8million to go towards our Oklahoma budget problems.

If a picture is worth 1,000 words, then this video is worth 10,000 words. This video was filmed close to an old unplugged or improperly plugged hole in Seminole Co., Okla. It was taken 2.5 years ago by an oil field worker on location who said five other wells were hit at the same time. If you listen closely you can hear the frac job over a mile away.

We need a new regulatory regime for horizontal drilling and fracking to protect Oklahoma’s most valuable resource – our drinking water.

This video shows the damage that was done to a vertical well by a horizontal frac job in McClain County. In this case, the frac fluid migrated up through the tubing and went into the oil tanks of the vertical operator overflowing them. This is becoming a weekly, if not a daily, occurrence.

Why? And how does it get solved?

The problem begins with the rule-making process at the Oklahoma Corporation Commission. Rules determine what and how drilling gets permitted.

The rules have not been changed to address the challenges that come with horizontal drilling. Rule changes take several months and the hearings are dominated by the big horizontal companies. Both OIPA and OKOGA work with big oil companies and testify on their behalf. Almost every attorney that practices with OIPA and OKOGA represents the horizontal drillers and are very adept and experienced at getting their clients what they want.

The judicial process at the Oklahoma Corporation Commission:

The first step is to go before an Administrative Law Judge(ALJ). The ALJ almost always rules in favor of the company wanting to drill and in one case told a protester, “Why do you keep protesting when you know we are always going to let them drill?” The appeal of that decision is the Appellant ALJ, with almost always the same results.

The final step of appeal is before the three Commissioners.

Oklahoma is the most pro-development oil and gas state. That is a good thing, but only to a point. Almost any company that wants to drill a well can get a permit to do so regardless of the potential harm to vertical well operators, and sadly even at the expense of the environment. The OCC routinely issues permits for these horizontal wells knowing (sometimes even with the horizontal well owner testifying that they will hit the vertical well). Most times horizontal drillers lie at the hearing and say that they will not impact vertical wells and then tell the vertical well operators to shut their wells in, knowing full well they are going to hit them.

Our regulatory body has the responsibility to prevent waste and protect rights. They also have the mandate to prevent oil and gas pollution. Granted they are understaffed. Permitting drilling activity gets almost all of the attention. That needs to change.

OEPA is sponsoring legislation to allow the OCC to self-fund. For 2.4 cents a barrel of oil and the BTU equivalent for natural gas. This would allow the Corporation Commission to fund the staff positions they need to keep up. It would also free up 8 million dollars for the legislature to use to solve the budget problems.We ask the other two petroleum associations to drop their opposition to this bill. Surely all of us that drill for and produce in this state should want a well funded professional regulatory body. The public should demand it!