Every horizontal and vertical well drilled in Kingfisher County…

All the yellow lines represent horizontal wells drilled right through them and fracked with millions of pounds of sand and millions of barrels of water. No wonder the vertical wells are destroyed! This should never been allowed to happen, at least not without willing sellers or deal makers.

And … horizontal wells with the vertical taken out: 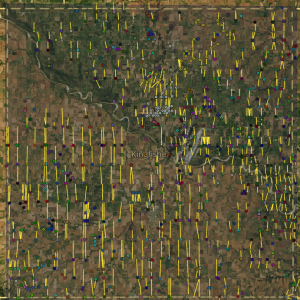 Newfield’s rate of return is higher in both the Scoop and the Stack plays(with a 2% tax rate) in Oklahoma than either the Bakken (10% tax rate) or the Eagle Ford (8.5% tax rate) Oklahoma is subsidizing their drilling in other states. 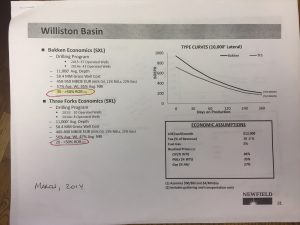 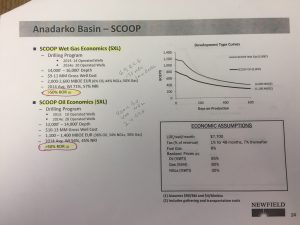 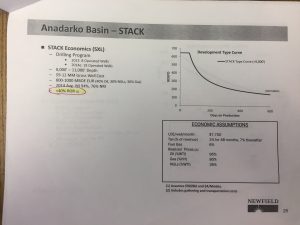 I think it’s time to explain why after nearly 40 years serving on the OIPA board and holding many positions including the office of President I chose to relinquish my position as a “lifetime” member of the board. I still consider OIPA a fine organization and an excellent networking group. But they have fallen short of advocating for the small producers across the state and have become a horizontal drilling association. Nothing wrong with horizontal technology; it is a game changer. But when it trespasses on the rights of vertical producers and the OIPA board refuses even the slightest measure to give them some protections that for me that is unacceptable.

Most of my time on the board we did our best to represent a broad spectrum of a very diverse industry.

There are differences between oil producers and gas producers.

There are differences between big and small companies and between privately held and public companies.

But for most of the time we got in a room and worked out something that allowed us to speak as one voice; even though sometimes the issue was so compellingly difficult that individual board members went a different path. They were always allowed to do so and without criticism.

In 1992 the board took a position on Natural gas pro-rationing to limit gas production from the biggest wells. The vote was split down the middle. The late Sam Cerny was our President and he disclosed to us all that his company would not let him support our position. Everyone understood. I could name Chairman after Chairman that spoke on behalf of the industry against their own interest.

That tradition of unity with freedom and with honor I held in high esteem.

That tradition along with many others is gone. Of course, change is the only constant in the world and we all have to embrace it one way or the other. However, some change requires a course correction or in pilot terms a 180 – going in the opposite direction.

At the end of the day, the change that required me to resign and work toward having a voice for small producers had very little to do with one issue. It was a cultural change.

The cultural change was many faceted.

There was greatly diminished effort to work out differences in a way that protected all producers. Individual board members, most of whom dedicated decades of service on a non-profit board for the benefit of all, were castigated publicly for disagreeing with leadership.

The tradition of what was required to be selected to be on the board was a back breaking change. Being selected to be on the OIPA board was historically an honor bestowed on individuals of good standing in the industry that had demonstrated a willingness to work, give of their wealth and their wisdom to the good of the entire industry. (Panas’s three Ws of requirements of a board member) That criteria changed to one of one W of the three- wealth. Big companies were given board positions not because an individual had worked for the industry or had acquired any wisdom thru years of hard knocks but because their company gave enough money. At the same time small, politically active and knowledgeable producers were told to “work your way” on to the board thru the many years of serving on committees.

At the end, this was the practice that left the small producers without a voice in OIPA. The big company members of the board are likely very good people. It’s just a different dynamic when a board shifts from a majority of those who run their own companies to those who work for someone else with little or no experience working in the public arena.

The biggest break in tradition for me was the shift in our culture as an organization that always tried to never ask for anything that was not in the best interest of our state. I know that sounds a bit altruistic for a business trade association. But it was the tradition of which I was most proud.

While many will disagree, I believe we broke with that tradition when the association supported and helped a few companies get a 2%permanent tax rate for new wells drilled.

I am embarrassed to watch teachers in my community have to take second and third jobs to make ends meet. The Gross Production Tax has gone from over 1 billion per year to 165 million affecting all our state’s vital services. Don’t get me wrong the position of trying to do what’s best for Oklahoma is not totally one of altruism. It’s also the best way to be a part of the Oklahoma community and has produced good outcomes for us as an industry. There is a reason Oklahoma is the friendliest state in the country to do oil and gas business. That is beginning to change. We are dropping in the public perception of our industry.

OIPA’s soon to be President Tim Wiggly said it best “vertical wells are our history, Horizontal drilling is our future”. That may be so, but that is no justification to disregard the 3000 Vertical producers in the process, which is what OIPA has done.

As traditional producers who run our own companies, live in communities all across Oklahoma, and as members not only of the oil and gas community but the community including our fellow men and women we can restore that voice. The Oklahoma Energy Producers Alliance was formed to give us that voice. I urge you to join us to make a difference for us and for our state by going to okenergyproducers.org and joining today.

It’s just not right to ever take someone else’s property. The big horizontal Fracking companies just do it because they can; then they say “sue us” knowing that small businessmen and women cannot afford lawsuits.

Call your state legislator today and tell them to vote no on SB867. Don’t expand horizontal fracking!

Mike Harris, from Kingfisher, Oklahoma, has worked hard his entire life. He is well respected in the oil and gas community for his knowledge and work ethic. He has managed to accumulate some working interest and a few properties of his own over the years. Now he is watching those that he has depended upon for retirement destroyed by horizontal fracking!

Call your state legislator and tell them to vote no on SB 867.

Tony gives a fair and balanced accounting of what’s happening. None of these guys are willing sellers. It’s shameful that they can be forced to give up property, by the state.

Here are a few of the decline curves plus the bottom hole pressure survey that shows the actual hit in real time.  The well with the pressure survey (Wakeman) actually got “bumped” (our term) from a November, 2015 frac that caused a loss in oil production (30 BOPM to 5 BOPM) (See decline curve), then “hit” in May, 2016 which killed it.  It has partially recovered.

The King-Vieth well was just hit again by another frac, so May oil and gas will be down and water up.

The Perdue 17-2 has seen an increase in production due to the hit.  But, as noted, the expenses have skyrocketed due to the frac hit (We had frac sand in the pump the last time it was pulled).

Below are links to documents of the decline curve and the other evidence of loss of production because of horizontal frac jobs:

We ask every school board in Oklahoma to take this same action – then follow it up by having those that care about education call their state legislators with one simple message ” restore the gross production tax to 7% for everyone, which is lower than any other state and pay our teachers”

Whereas, Oklahoma has led the nation in cuts to per pupil state aid expenditures since 2008; and

Whereas, the State of Oklahoma has experienced repeated revenue failures during the last two years; and

Whereas, for the current 2016-2017 school year education appropriations provided by the Oklahoma State Legislature are $84 million less than what was promised in the common education budget due to revenue failures; and

Whereas, Tulsa Public Schools has received over $30 million in cuts in state aid since 2008; and

Whereas, midyear reductions and shortfalls resulted in an additional $4.5 million dollars less in education funding for the 2016-2017 school year; and

Whereas, further funding reductions are anticipated before the end of this school year; and

Whereas, sustainable and appropriate funding from the State of Oklahoma is crucial to the Tulsa Public Schools Board of Education’s mission to ignite the joy of learning and prepare every student for the greatest success in college, careers and life; and

Whereas, over $1 billion dollars in unnecessary tax breaks to oil and gas companies in the last three years alone have been a contributing factor to the decreased education budget and recurring revenue failures; and

Whereas, eliminating these tax breaks and returning the Gross Production Tax to the historic levels of 7% would yield approximately $500 million in 2018; and

Whereas, immediately returning the Gross Production Tax rate to 7% is the most direct route to avoiding both the impending cuts and to putting the state budget on a sustainable path forward

Now, therefore, be it resolved that we, the members of the Tulsa Public Schools Board of Education, joining with voices from all sectors and throughout the State, hereby do call on members of the legislature of the State of Oklahoma to immediately pass legislation to return the Gross Production Tax to the historic rate of 7% to be effective for all wells on July 1, 2017 and thereby put on us the path for an adequately funded public education system with the resources to pay our teachers an honorable wage and support the most important of our work as a State: preparing every student for the greatest success in college, careers and life.

Some of our ongoing and growing list of vertical wells being destroyed by horizontal frackers.

This list is  Gilliland/Weaver Wells watered out by Horizontal Wells.

This is a Must See – An OETA story about horizontal frac jobs destroying hundreds of vertical wells.

This should begin to change the narrative from one of all out development at all cost, to one of judicious development with the rights of others and the environment protected.