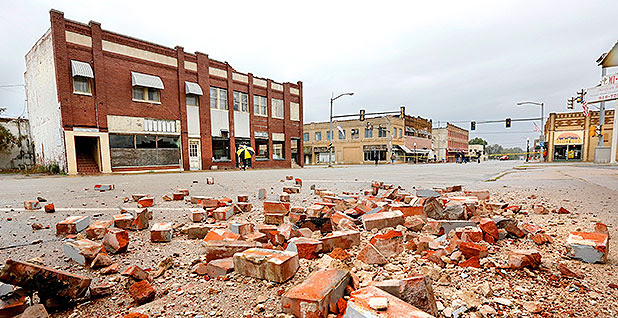 EARTHQUAKES
Okla. shaking cut in half but still tops in Lower 48

An earthquake in November 2016 shook the bricks off buildings in Cushing, Okla. Jim Beckel/The Oklahoman via Associated Press

The number of earthquakes experienced in Oklahoma dropped more than 50 percent last year, although the state remains one of the most seismically active in the country.

The quakes have been linked to the state’s dominant oil and gas industry and its wastewater disposal practices. The decline in shaking has been attributed to actions by state regulators and a slowdown in the industry.

The state still had more such quakes than any other state in the Lower 48, including California, based on a preliminary review of data from the Oklahoma Geological Survey and the U.S. Geological Survey. Both agencies generally adjust their numbers each year after a review.

Oklahoma is not the most seismically active state, however. Alaska had hundreds more earthquakes than Oklahoma.

The shaking dropped steeply in the Oklahoma City area. In 2016, there were 74 quakes in Oklahoma County, which includes Oklahoma City. Last year, that dropped to 20.

As in 2016, the western Oklahoma counties of Woodward and Grant had the most shaking. But Lincoln County, east of Oklahoma City, saw an increase in the number of quakes last year.

Scientists have known for decades that deep injection of industrial fluid, such as oil field wastewater, can cause earthquakes in rare cases. The fluid seeps into faults, essentially lubricating them, and they slip.

In Oklahoma, oil production methods that create unusually large volumes of wastewater have combined with favorably aligned faults to cause swarms of quakes.

The state had averaged about two quakes a year until 2009, then the number started increasing. It shot upward as drillers moved into northwestern Oklahoma to produce from the Mississippi Lime formation, which creates far more wastewater than conventional production.

There have been a handful of injuries, and most of the quakes aren’t large enough to do significant damage, but many residents are concerned about the long-term effects on their homes and the difficulty of getting earthquake insurance.

USGS started attributing the rise in earthquake activity to wastewater injection in 2012. But it took until April 2015 for OGS and state officials to publicly acknowledge such a connection. In a deposition last fall, Oklahoma’s former state seismologist said he quit because of political pressure to not link quakes to the oil industry (Energywire, Oct. 20, 2017).

The number of quakes has been declining since late 2015 or early 2016. The drop has been attributed to restrictions on wastewater injection imposed by the Oklahoma Corporation Commission and the price slump that led to decreased production. As the industry has bounced back, production growth moved from the Mississippi Lime to plays known as the STACK and the SCOOP, which produce far less wastewater with the oil.

Industry officials say the drop in the number of quakes shows the advantage of cooperation between regulators and oil companies. Chad Warmington, president of the Oklahoma Oil & Gas Association, said companies shared data and expertise with state officials.

“The drop in the number of earthquakes is a good example of what happens when the industry and regulators work together to find reasonable, science-based answers,” Warmington said.

Reprinted from Energywire with permission from E&E News. Copyright 2017. E&E provides essential news for energy and environment professionals at www.eenews.net. For the original story click here.

Damage to Vertical Well in McClain County
Scroll to top