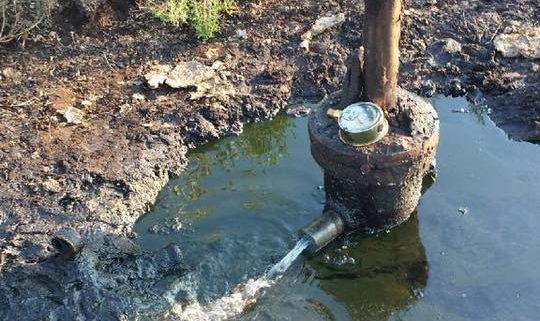 Here is a letter from an Oklahoman that demonstrates the difficulty getting justice when their wells are destroyed by a horizontal frac job.( the picture is a purging well during a horizontal frac job)
Almost everyone is either afraid for their names to be used or are in litigation .
The level of intimidation here reminds me of Karen Silkwood.

I am certainly glad that someone is taking this on at long last. As I am sure has told you we are not opposed to horizontal drilling, except for the earthquake problem, which the Oklahoma Corporation Commission allowed to happen. We are opposed to third parties taking the property of existing vertical producers without compensation.

Regarding our situation we had 16 vertical wells which have consistently produced for the last 30 years. Our schedule is attached. All were gas wells on plunger lift so LOEs were very low and we had few if any mechanical problems. Water production was minimal, so we had no need for a salt water disposal well. A few years ago we received an out of the blue offer to buy us out. We weren’t interested in selling and declined. At that point I received several calls from their land VP. He informed me that if we did not sell to them, they would simply acquire toeholds and go to the OCC and get the prospect anyway.

When we declined to sell, they proceeded with their campaign . They were requesting 640 acre spacing. I conferred with our OCC attorney expressing my concern about the almost certain destruction of our existing production. To my dismay, he confirmed that the OCC would let them drill regardless and that we had no recourse at the OCC. When I inquired about the 50% consent requirement, he replied that it didn’t matter because they would apply for an exception to that rule and it would be granted. When I inquired about location exceptions and exceptions to 165: 10-3-28 I was also told it didn’t matter because they would get an exception to those rules also. When I asked if there was any recourse at the OCC when They ruined our existing verticals, I was told that there was not and that Our recourse would be private nuisance action as stated in the Greyhound Leasing 10th Circuit case. When we arrived at the OCC for the hearing the ALJ went “off the record” to state that he didn’t know why people kept protesting these cases because his docket was all crowded and basically, surely everybody knew that protests would not work out and the OCC would allow horizontal drilling even where verticals existed in the same formation. At that point, I realized that no matter how much we spent at the OCC, we had no alternative but to try to make a deal.

We farmed out our acreage. Our FOA provided that They would indemnify us from any liability or damage to our existing wells. They repeatedly insisted, and this appears in a few of the OCC orders, that there would be no damage to our existing wells. You will see from the second attachment that They drilled 14 wells and sent over 4 million pounds of frac sand and over 3 million barrels of slickwater our way. All pumped at 4-7 thousand psi,. Every one of our 16 wells is either watered out or full of frac sand. Because of the low volumes we could produce from some of the wells due to shut ins at their direction and after swabbing, DCP pulled our meters and cancelled our contract. There was a $350 per well penalty for volumes under 20 mcf per day. DCP’s suggestion was that we lay a gathering line, install our own meters at each well, and deliver to DCP at one central delivery point. We now have 15 plugging liabilities. While We were paid for its acreage and have an override on the horizontals, They haverefused to pay for the verticals .

I have tried to condense this, but I wanted you to get the full picture. The present proponents of some of these bills obviously don’t know what they are talking about when they claim existing verticals are protected by the OCC or the District Courts of Oklahoma. The OCC could care less. If you need any further information, just let us know. This family has joined OEPA.
If you want to help us get fairness and justice for the small producers in Oklahoma go to okenergyproducers.org and join this fight.

Open Letter to OIPA Board
Scroll to top