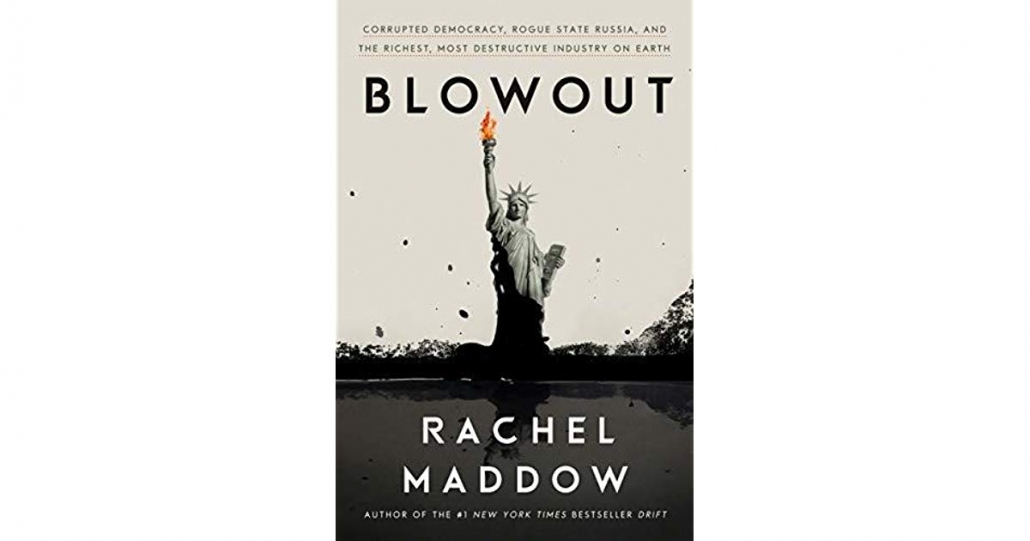 Rachel Madcows (Maddows) new book “Blowout” is a scathing diatribe that takes the hide off the oil and natural gas industry on an international scale.

Buried in the introduction she says, “I do not propose to discount or minimize the powerful and positive effects the producers of our hydrocarbons have had on our own country and the world at large. I like driving a pickup and heating my house as much as the next person and, the through-line between energy and economic growth and development is as clear to me as an electric streetlight piercing the black night.” This veiled admission of the enormous role oil and gas have played in the modernization of the world is the last bone thrown.

However, she also is the first author of note to recognize the difference in the small business independent producer and the monolith that has become “big oil.” (Pages 260-262)

The difference between her and the rest of the far left is that she is unrelenting and extremely articulate in her criticism. And even more dangerous, she is effective. Her unique brand of villainization is especially effective to those susceptible to extreme hyperbole and one-sided snapshots of a narrative; in other words a rapidly growing number of Americans.

She is the Donald Trump of the left when it comes to the effective use of words that tear down and ridicule.

However, getting past the vitriol and the obviously one-sided liberal bias, Blowout is a thought-provoking and stimulating read.

This work should be a call to arms to all of us in the oil and gas industry to “re-imagine” who we are and what our place is going to be in our planet’s history. Right now it’s looking dim.

The International scope of the “sins of big oil” in her book I find enlightening and most likely credible.

Her foray into Oklahoma, the industry’s contribution to Oklahoma City, and to American energy independence was for the most part positive. The contributions and sins of the shale industry in America were somewhat accurate but awfully one-sided. I am quoted in this section. It’s no secret that I have issues with horizontal frack jobs destroying vertical wells. It’s also well known that the Oklahoma Energy Producers Alliance, of which I am the President, instigated a restoration of the 2% gross production tax to 7% (compromised to 5%) to alleviate our massive loss of teachers because of low pay. I am proud of that work.

We are Oklahomans that care about our state. But so are men like Harold Hamm, Larry Nichols, and the late Aubrey McClendon. Even though I was treated fairly and quoted accurately, it’s painful to be quoted in the same chapter that is so mean spirited to them. While we did and still do disagree on a couple of issues, there is no one whom I have greater respect.

My takeaway from the book is that the oil and gas industry is making a big mistake by not getting into alignment with the public’s concerns regarding Climate Change. At this point it’s irrelevant how big a factor we think fossil fuels are in changing our climate. Denying it is like trying to swim upstream in a raging river. We are drowning. The industry throwing money at the issue denying the problem of climate change only reinforces the negative public perception of our industry.

We must begin to work toward solutions that we can live with that diminish carbon emissions. The best answer is to start with regulation. Regulation that is reasonable and effective is not our enemy but our friend. It’s the means by which we keep (restore) faith with the public. As the book accurately points out, the regulation of the Oklahoma Corporation Commission in conjunction with working with the Oklahoma Geological Survey produced positive results in dealing with our earthquake issues and has been mostly accepted by the industry.

We can live in peace with our neighbors. But we must respect their concerns and address their fears. I like to think of the acronym of U.S.A. as a metaphor for US All.

He Who Is Without Sin Cast The first Stone